After yesterday's NS73 activation I thought about an activation on Sunday on the Lewis & Clark Trail TR09. It was another pretty day and the truck was still setup so I headed out around 3PM to a location in West Alton MO that I had scoped out a couple of weeks ago. It turns out to be a fairly quiet RF spot for 40 meters. Since it was going to be a quick activation I decided to stay on 40 meters.

The activation lasted about 60 minutes with a total of 60 QSO's logged.

Interesting comment I received about my transmission being "out of band". I was on 7.298 LSB and should be "in band" but I was about ready to pull the plug on the activation and no sense getting into an argument. I do know that I was in the AM portion of the band and I gladly offered to move. No harm done and it was another fun outing.

One of the reasons I wanted to try some operating today was because I experienced some RF getting into my tablet/CIV connection. I switched back to my ugly balun, moved the Balun Designs choke to the back of the radio and added some ferrite's to the CIV and power leads. I only saw the tablet hiccup once today. Also the on board recording feature was working again on my IC-7100 radio. 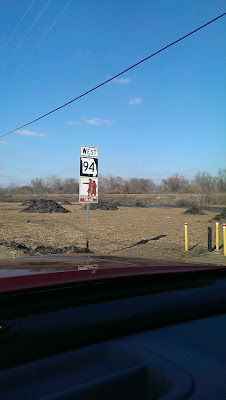 I returned to the Ulysses S Grant house today for my second activation. The setup was exactly the same as last time except I did not forget the tablet this time.

Had a problem that was probably RF getting into the tablets interface. I would see the mode change on the screen while transmitting. I will need to try adding some chokes the CIV lead and the power lead to the Piglet interface, The only difference this time is I used a shorter coax to the AH-4 tuner with a Balun Designs choke. Last time I used a ugly balun. Using the tablet worked well because I only needed to log the callsign and when I was done I just had to export the ADIF to an email. When I got home I imported it to N3FJP, fixed a few errors and uploaded to LOTW. Much better then last time transferring from paper to my log.

This time I had enough of a pile up and I was feeling the chasers frustration I switched to going by the numbers. First time I have ever had to do that but it worked well as I worked about 5 stations per number. By the time I made my second time through the numbers nobody was left! Either I worked them all or I ran everyone off.

One of the park rangers came out and took pictures of me and the truck setup. Not sure what they are going to do with them but they were smiling so I think I am ok! 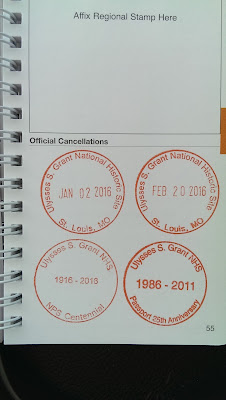 This year was my 3rd year of operating for Winter Field Day but this year I decided that I wanted to do more than an inside operation so I purchased a tent. I researched some camping locations but since I consider myself an avid indoors'man and that I would be by myself I decided that I better stick close to home. This would allow me to claim 1000 bonus points for outdoors and 1000 for battery power. Operating from home also gives me access to all of my tools and supplies for my first tent operation.

I took Friday off to prepare and stage the equipment in the garage but did not do any setup as the rules say that you can start your setup 4 hours before official start of the event. This meant that I would start setting up at 7AM CST. So at 7AM I started hauling out all of the mast and antenna materials to the back yard. The plan was to raise a push up mast to the full 32 feet with a dual band 2m/70cm antenna at the top and then a pulley just below it. I have used this mast many times with a trailer hitch mount on my truck. No big deal, hook the guy lines on it, raise it up and then stake out the guy lines. This time the mast was in the middle of the backyard and trying to raise the mast, keep running back and forth between guy anchors during a stiff breeze was challenging. at about 25 feet I lost my nerve and decided it was high enough. I then pulled up a 80 meter doublet and launched the ends into the trees and tensioned everything. I knew I was behind schedule but I realized that I had spent 3 hours wrestling the antenna system. 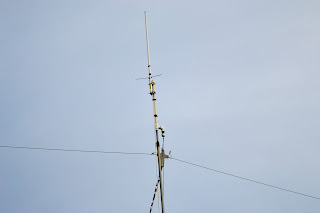 The tent I purchased was a Coleman Octagon 98 model which is considered an 8 person tent. I picked this one because it allow a person to stand upright plus it was big enough that it could support two operating positions for field day. I did not get to do a practice setup ahead of time so at 1 hour before the contest I started putting the new tent together. Luckily I watched a YouTube video on how to erect the tent because the instructions were a pain to follow. It took about an hour to put up by myself. 2 people would have taken probably 15 minutes. So now I have to setup the operating position, make the connections and grab something to eat. 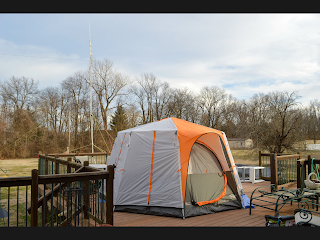 I threw some food down and started hauling table/chair, batteries and radios into the tent. By the time I had everything ready I was exhausted and it was about 1:15PM so that means I lost the first 2 hours of the contest which I consider the most critical time to rack up the QSO count. I got started by using my usual search and pounce mode to get warmed up. I did find that the band conditions were fair and that I would start my plan of trying to get as many multipliers as possible. Contacts were a little harder to come by then I thought they would be but I did already miss the first 2 hours.

I ran 3- 35ah batteries in parallel with a 50 watt solar charger. I also use a TG Electronics DC booster once the voltage starts to drop. It is a great addition to any portable operation. Battery voltage had dropped to 12.2v after about 8 hours of operation but the booster maintained 13.8v at the radio. 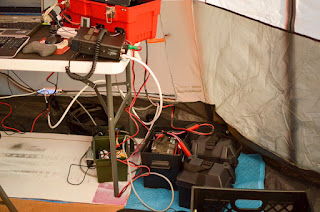 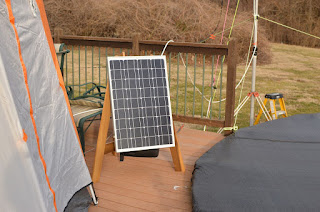 Heat in the tent

Despite the warmth from my sunburn that I received during my 3 hour antenna raising it started to get cold in the tent around 9PM. I fired up the propane heater and it quickly was in the mid-70's and I then started shedding layers. Yes, I had a fire extinguisher and CO2 detector in the tent with me. 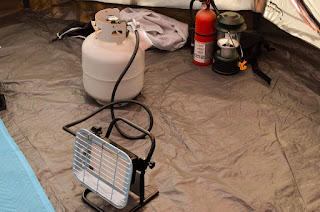 I used my IC-7200 from my shack along with a LDG AT-200 Pro tuner. For the 2m and 70cm contacts I used a IC-706. I always drag out too much stuff when going portable but I like things to be comfortable such as having my boom mic and wireless keyboard. The red box is a power center I built that has the solar controller, amp/volt meters, DC booster, USB and cig plugs. Works great when you are using more than the bare minimum of equipment but it does take up a lot of table space. 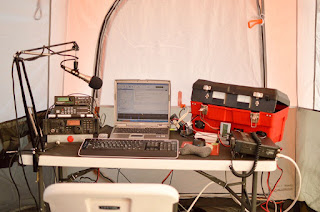 I did my usual and went too elaborate on the antenna setup. All that work for the 2m and 70CM multipliers was not worth losing the first 2 hours of the contest. I could set up a schedule with a local ham next year using a HT to gain those multipliers.

I take too much stuff along with me.

I do not eat or drink enough.

I need to stay up later to give 160 meters a chance.

I need to find a partner for this operation.

Thanks to former SPAR group for getting this started years ago and also thanks to the folks that have picked this up for 2016. The Facebook group is a great place to build the excitement for 2017.

Final score should be around 3300.

Final score was 3376. That score placed me in 8th place in the 1O category. This was out of 40 stations. Only a couple hundred points separated the 2nd through 15th place finishers.