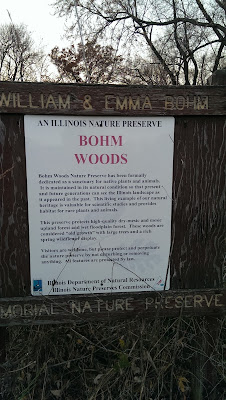 This was the first activation of this nature preserve as part of WWFF. It is located only about 15 minutes from my house but there is only parking for 2 or 3 cars. It is deer season and hunting is allowed in these woods so I have been staying away from this location. There were no hunters present so I pulled into the parking area and got set up.

As you can see from the picture this property was given to the state of Illinois by the Bohm family to preserve these woods. The is the last "old growth" forest in this area especially for an urban area. This also borders the Southern IL University at Edwardsville campus. My son Simon has spent time in these woods for biology classes and has pictures of trees over 100 feet tall and several feet in diameter.

Due to the small parking area I could not put out the radials like I normally do especially for
40 meters. I started on 20 meters and boy was it a struggle to get 30 contacts even with frequent spots. 20 meters was good to the east coast and Canada. It was surprising that I only had one 20 meter contact to the west. After I switched to 40 meters things got moving! I made 60 contacts on 40 meters with a nice steady pace. Thanks for the spots and Facebook chatter to keep the run going. 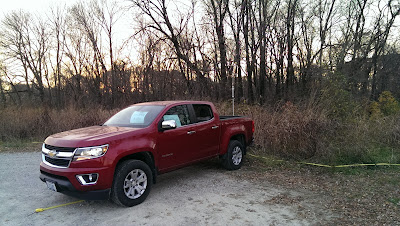 I had traveled to the southern part of Illinois so my better half could attend a music festival so that left me with some free time before I retrieved her so I planned to activate the Giant City State Park. This is a beautiful park with interesting rock formations and many hiking trails. I hope to return for another visit sometime especially during the fall colors.

A spot was selected by using Google Earth with the GPS coordinates entered into my WAZE app. As I started to wind through the park I would drop cell coverage therefore the mapping would freeze. I eventually made it close to my selected spot but this was also deer season and this park must be treasured by the hunters as the sides of the road had pickup trucks all along them so I figured that parking in a secluded spot in the woods during deer season was not the safest plan. I backtracked to a public playground area that also had cell coverage so I set up there. 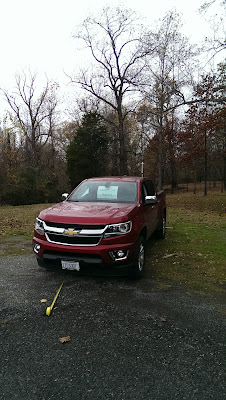 Normally I use a 31 foot fiberglass mast with an AH-4 tuner but the mount is large and since I was spending the night at a hotel I did not want to have to put the mount inside the truck over night so I tried out a different arrangement. I used a trailer hitch mount with a 3/8 x 24 antenna mount, the
4 foot Hustler extension, Wolf River Silver Bullet 1000 coil and a 16 foot MFJ telescoping mast. This takes up less room inside the truck when traveling. 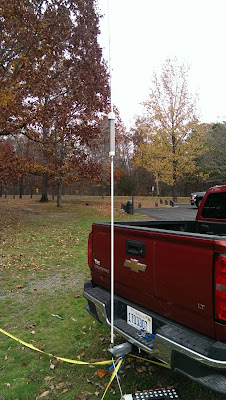 Unfortunately there was a wind advisory this day and the weather folks got it right as we had 40 mph gusts and no way could I fully extend the mast so I only extended the MFJ mast to 102" as I had already tested this at home. I used my antenna analyzer and quickly was set up on 40 meter phone. I started running on 40 meter phone and quickly reached 20 contacts and then I could not hear anyone else as I had a S7 noise level. I retuned the antenna and radials for 20 meter phone and began running again. I was having much better luck here as my noise level was S2. The rest of the activation was on 20 meters.

Know your grid square and the county you are operating from for when people ask. Sorry folks, I was in EM57 and Jackson County.

Save you maps in your phone in the off-line mode for when you lose cell coverage. I have taught myself this lesson at least 3 times but it is not sinking into the ol' noggin.

Truck engine is noisy on 40 meters so I need to work on that some more. Next I will try to add bonding to the hood. 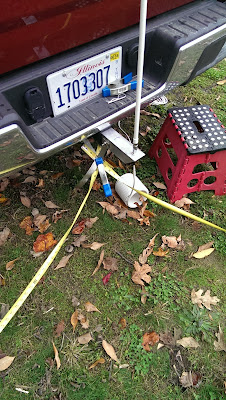 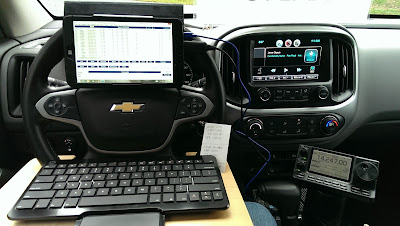